Just Listed in Isle of Palms

The fully furnished one bedroom condo is located in the G building of the Residences at Sweetgrass. This is the most private building closest to the beach and new resort ...

This is the ideal beach home! The beach access is just steps from the house, and there are no streets to cross and no traffic to worry about. It is perfect for a large fa...

Located just 15 miles east from the heart of downtown Charleston, the Isle of Palms is a beautiful city with beachfront views all around. Home to both vacation home owners and year-round residents, the city has a population of about 4,290. First named Hunting Island and later Long Island, the Isle of Palms didn’t get its final name until the island was purchased in 1988 by J.S. Lawrence. With six miles of relaxing beaches, the Isle of Palms was a low-cost housing option for veterans returning from World War II originally before it became a popular vacation getaway for full-time and part-time residents.

While on the beaches you might run across baby turtles or turtle nests thanks to the Island Turtle Team that monitors their nests and records the number of hatches per year. Other fun activities that are common on the sandy beaches of the Isle of Palms are biking, beach volleyball and even picnicking! The active city has fun in store for all members of the family including; golf courses, tennis courts and fishing at the Isle of Palms Marina. Two of the island’s nationally known golf courses are the Harbor Course and the Links Course, perfect for anyone to enjoy. For the tennis lovers in the community, the island provides both clay and hardcourt surfaces to play and practice on.

Situated along the Atlantic Ocean, the Isle of Palms is a barrier island which are coastal landforms formed by waves and tidal action. This barrier island is also home to the well-known Wild Dunes resort. The resort offers luxury vacation homes, condos and cottages, plus amenities such as spa and wellness, fine dining, golf, tennis, bike rentals and even a stunning wedding venue. With a quick 15-mile drive west, residents will find easy access to all of Charleston’s boundless community events. The gorgeous beaches and water views of Isle of Palms continue to bring life-long residents as well as short time visitors keeping the city thriving and exciting all year-round.

Questions about buying or selling a home in Isle of Palms? We have answers. Just ask! 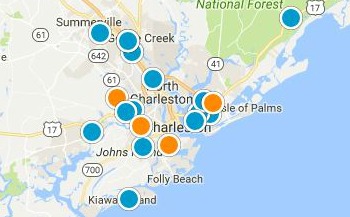